Every summer since 1992 we have run an Arts summer scheme.

We replicate the feel of a small company. This year 60 + pupils devised rehearsed and performed a new production ‘Bandstand Memories'. We try to use the same group of artists so that we can work with ease and speed. Participants choose to be set designers, digital artists, programme makers, Dancers, Actors or musicians.

The end performance is always about an hour long and is a genuine surprise to all the staff as we never know what direction the young people will take us on. 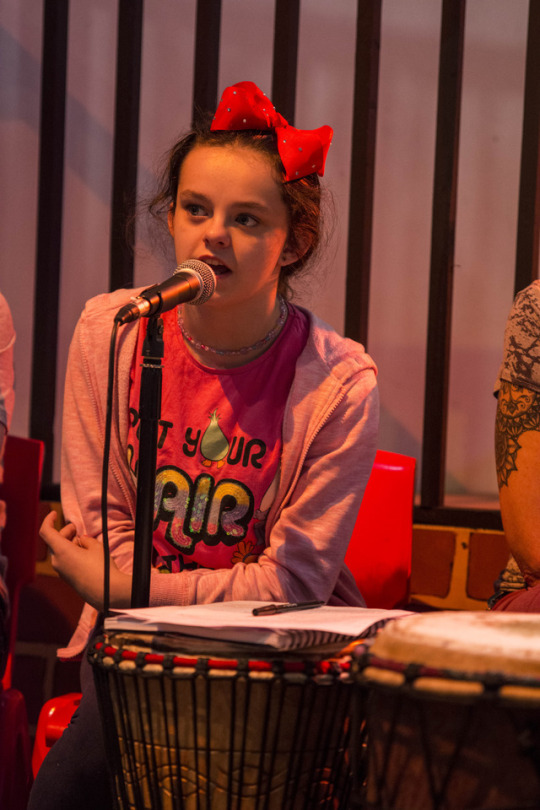 We only give them a title and an opening idea the rest is up to them.... This year was no exception, the graffiti on a park bandstand begins to tell the story of an elderly lady who knits memories... Richard Syner  is a very talented musician who has created  music for 'Freefall' dance company  for ever and ever and a bit. The young people who work with him form a band and create all of the music for the show, including music for the dancers and FX for the actors. This year we were treated to a beautiful solo performance by one of our younger students, an energetic 1960's homage to that little known group 'The Beatles'.

They also captured a beautiful feeling of loss as the elderly lady knitted together the story of her family over the last 100 years.  Our Actors wove the dance and music together as the park's team and local council officers. All of this was performed in front of ever changing projection that illuminated each scene, and was complimented by a 3D useable bandstand created by the set designers. Families were kept up to date each evening by a new batch of pictures on the scheme blog. The final performance played to standing room only and proved once again how talented our young people are.